Few medical cases are as fascinating as those treated with Neural Therapy. This amazing treatment involves injecting Novocain, a commonly used analgesic, into an old scar or site of injury. Like magic, a seemingly unrelated chronic ailment—such as migraine headaches, joint pain, anxiety, or chronic fatigue—can disappear with Neural Therapy.   For example, a patient once came to me with depression and anxiety. After some discussion, I learned that she’d had her tonsils removed when she was a child—a very frightening experience for her. I recommended that she try Neural Therapy. One injection of Novocain to the area of the tonsils was enough to cure her depression and anxiety. The patient called me the day after her procedure to thank me for a “miraculous” recovery. She also reported a resolution of arthritic knee pain that had bothered her for several months. 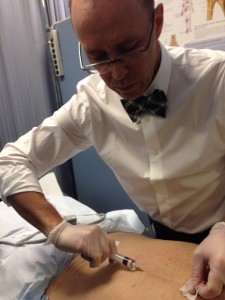 Astonishing, yes! But Neural Therapy is not hocus pocus. There’s a science to the way in which it works. To understand Neural Therapy is to recognize the connection and interplay between the physical, psychological, and emotional mechanisms of the body.   First, it helps to see that sometimes a scar is much more than just a mark on the skin. The site of an injury—or “focus of irritation”—can also hold all of the emotional and psychological experiences that come hand-in-hand with a physical wound. These are all stored together in the same memory “folder.”   When the experience is significant or traumatic, the focus of irritation can last for years. The site remains active, sending out impulses that bombard the vegetative nervous system. This distracts the nervous system from monitoring the functions of the immune and hormonal systems. Hence, the body cannot adequately perform some of its routine operations—such as eliminating viruses or bacteria, or keeping hormones at an optimal level. As a result, an ailment or condition can arise in a completely different part of the body from the original site of injury.   When Novocain is injected into the old site of injury with Neural Therapy, something amazing happens. The Novocain blocks the impulses coming from the scar to the nervous system. For about 20 minutes, the nervous system stops “seeing” the scar. Neural Therapy “closes the injury folder” that holds the physical, emotional, and psychological content. This gives the body a chance to resume its normal functions without distraction—presenting an opportunity for incredible healing.

My practice is filled with success stories from Neural Therapy. The following are just a few examples of the remarkable results that can be achieved.

My Approach to Neural Therapy

During an interview, I always try to identify the traumatic experiences in a patient’s life. Finding a focus of irritation often involves a bit of detective work, but some clues make it unmistakable. Time-wise, the focus of irritation must precede the current condition that we treat. The location of the scar or injury must be on the same side of the body as the chief complaint. Generally, the patient will make a spontaneous “connection” to it, because the subconscious mind knows where it is. This is an interesting phenomenon that my teacher, Dr. Ulrike Aldag brought to my attention when she taught me Neural Therapy.   Neural Therapy was developed in Germany and remains enormously popular there, though it is less known in the United States. In my practice, I use Neural Therapy to treat a vast variety of complaints—including arthritis, low back pain, migraine headaches, trigeminal neuralgia, chronic fatigue, allergies, gynecological and urological conditions, impotence, urinary incontinence, phantom pains, depression, anxiety, and PMS.   Often, only one injection is all that is needed to achieve incredible and lasting results with Neural Therapy. Patients are often astonished by their body’s dramatic response, and by the fast improvement of their chronic and intractable ailments. Talk to me about how we can achieve remarkable and life-changing results for you, too, with Neural Therapy.